Guilt and the Pet Owner 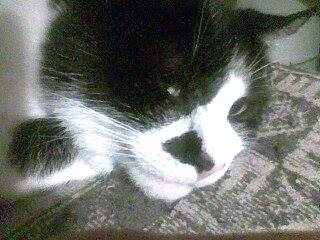 Here I am again, once more in the terrible situation of having to decide whether or not to euthanize one of my beloved animals. This time it's one of my cats. He was born in my porch, his little feral mother having decided that I looked like I'd provide them with a suitable home. She gave birth to two sons and they moved in and allowed me to look after them. Sylvester is the last one of the three. He's eleven.

He suddenly appeared with a sore on his face. I thought perhaps he'd been in a fight, he's not called Sylvester for nothing. He's always been a bit of lad, bringing home gifts, chasing other cats. But when I took him to the vet's four weeks ago she said that she felt it was either an abscess or a bad cancerous growth. These past few weeks he's had injections, antibiotics and latterly steroid treatment. He even stayed for a week at the vet's while they gave him treatment there.

Even so, when things don't seem to be working the guilt that many animal lovers feel is intense. There are so many concerns about doing the right thing, not prolonging their pain, but at the same time not giving up on them either. Here are some of my thoughts and feelings today.

- Is it as bad as it looks? I know that there have been times when I was sure that an animal was close to death and then, one injection later it's been completely fine. Sometimes animals recover amazingly quickly from situations that look very serious.

- Have I done enough? Agonising over the options of what to do to help a sick animal is a nightmare. They trust us so much. My beautiful cat just looks at me and purrs while I decide what to do about his future.

- Did I miss some of the signs? Was I negligent in not noticing him being unwell sooner. There is dreadful guilt at feeling that I in some way should have intercepted his illness earlier and perhaps been able to have more time to treat him. I know that sometimes I'm not fully alert to my animals. I love them, stroke them, buy them the very best food and drink but sometimes I am busy and don't check them over.

- Am I being selfish in keeping him alive? There is no way that I want to keep a sick, suffering animal alive just to suit my own selfish wants. They can't tell us how they're feeling. Sometimes I've had animals that don't seem to be in distress but are very ill and need to be let go as a kindness. Further treatment sometimes just prolongs their suffering.

- Are there other options? Should I go to another vet, animal hospital, practitioner and get a second or third opinion. Sometimes that can be a cruel option, prolonging suffering and distress. The animal has no idea what is going on and is poked, prodded and medicated. I trust my vet, otherwise I wouldn't be going to her in the first place.

Well, as a final word, since I started this article I have been to the vet's. I was advised to put my little cat to sleep, so I did and then brought him home and buried him in my garden. I'll get a headstone for his grave. He's buried next to his mother and his brother. A source of comfort is that he has had a good life, especially for a stray. He's enjoyed gourmet dinners, central heating and a cosy place to sleep. And, at the end, no prolonged suffering.

This article first appeared in April 2011, but I feel it's just as relevant today.